"Brett has certainly assisted Attar in improving the structure and financial management of our business... 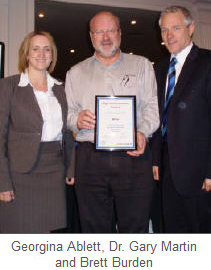 "Brett Burden is not only our Actioncoach but has become part of the Attar team; he clearly understands our business, the Company values and vision and ensures management stay focused on the priorities necessary to achieve our growth and profit targets!

Brett has been invaluable in asking probing questions which allow us to consider alternative solutions to our challenges, and to providing a sounding board for any concerns we may have had about decisions or direction.

Brett has certainly assisted Attar in improving the structure and financial management of our business so that we can now focus on both enjoying what we do and making it profitable."

Dr. Gary Martin is one in a million, a very clever man who had built an incredible business over many years. The problem was that he was so good at what he did that that it was never going to be possible to replace him. This was starting to cause a little anguish for Gary because even though he loved what he did he was also longing to spend time travelling with his wife, playing with the grand kids and enjoying the fruits of all of the hard work and effort he had put into building his business over the years.

Within 2 years of working with Attar we had finally found a compatible qualified General Manager to run the organisation which allowed Gary to take off with his bride (Robyn) for a six weeks European holiday. Something that he’d never considered possible in the past.

The thing I most enjoyed about working with Attar was their values structure. The business was very family orientated and all decisions, even at board level, were based primarily around loyal staff and how it would impact on the Attar family as a whole.

Click the link to see what Attar do and why they are the leaders in Australia.

Brett Burden. Award winning Business Coach for over 25 years, Brett has the experience, tools and resources to help you very quickly gain control of your business and get you your life back. He’s helped dozens of business owners do exactly that.
CONTACT